Ringer
How Gakuyo took Sh. 1 billion from unsuspecting investors to fund lifestyle
CDSC Gets Nod to Sell its SLB Product to Pension Schemes
How I use hydroponics to feed my 700 chickens and guinea fowls
CBK’s Forex Reserves Plunge to $ 8.2 Billion
Safaricom’s first dealer who built a multi-million empire
Eneza e-learning platform to be available in Rwanda
Facebook Supporting Kenya and Other Elections in Africa
Boosting Network Connectivity in Rural Kenya: A Case of Ngurunit
The Rise of Meme Culture in Kenya
Narok County Settles 90pc Outstanding KEMSA Bill After 3 years Break
Home Economy Rwandair banks on stable routes as flights resume
EconomyGovernment & PolicyInsurance 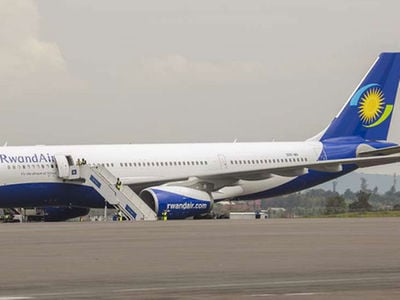 RwandAir is banking on citizen repatriation and business travellers when the airline finally resumes most of its flights on October 1.

The national carrier will also capitalise on its existing network and stable routes as it seeks to salvage the remaining part of the year since tourism remains unreliable.

Some of the flights that will resume on October 1 include the Kigali-Entebbe, Kigali-Brussels, and Kigali to London, Johannesburg, Lagos and Accra.

“As we resume most of our flights in October, the focus will be on stabilising our networks,” said Jimmy Musoni, RwandAir’s head of global operations.

He said the strategy will be to focus on routes with high volumes and frequencies as they monitor market recovery.

This is Rwanda’s tourism peak season when tourists would be flocking the country or transiting to regional destinations.

At the height of the pandemic, the airline cut employees’ pay as a temporary measure to stay afloat. The salaries of those who have resumed work and are active has been restored to normal, but those who will resume in October will have to wait.

Since resumption of flights on August 1, the actual numbers of passengers are yet to be computed, but most routes have had good traffic especially Douala, Libreville and Cotonou.

Flights to Dubai too have seen an increase due to business trips, but the busiest route has been the Kigali-Guangzhou, which has operated almost full board. The Lusaka route has had the lowest numbers.

With the resumption of Kenya Airways flights to Tanzania on September 21, Rwandair will have to depend on its usual regional routes.

“Competition will not be a pre-occupation for us. All airlines are trying to protect their operations as much as they can, taking advantage of markets that are starting to recover,” said Mr Musoni.

He said the airline lost up to 45 per cent of its annual revenue due to the pandemic.

Other airlines operating the Kigali route like Ethiopian, Brussels, KLM, Qatar Airways, KQ, with the exception of Turkish Airlines, have resumed flights.

“All airlines coming to Kigali are advantageous to us, they feed into us and we feed into them, it’s good that they have resumed operations,” he said.

Dr. James Mwangi joins Global CEOs in signing a commitment to champion a cross-sector collaboration for a Purpose–First Economy

CDSC Gets Nod to Sell its SLB Product...

Eneza e-learning platform to be available in Rwanda

Interview with Coca-Cola Communications Director on Role of...